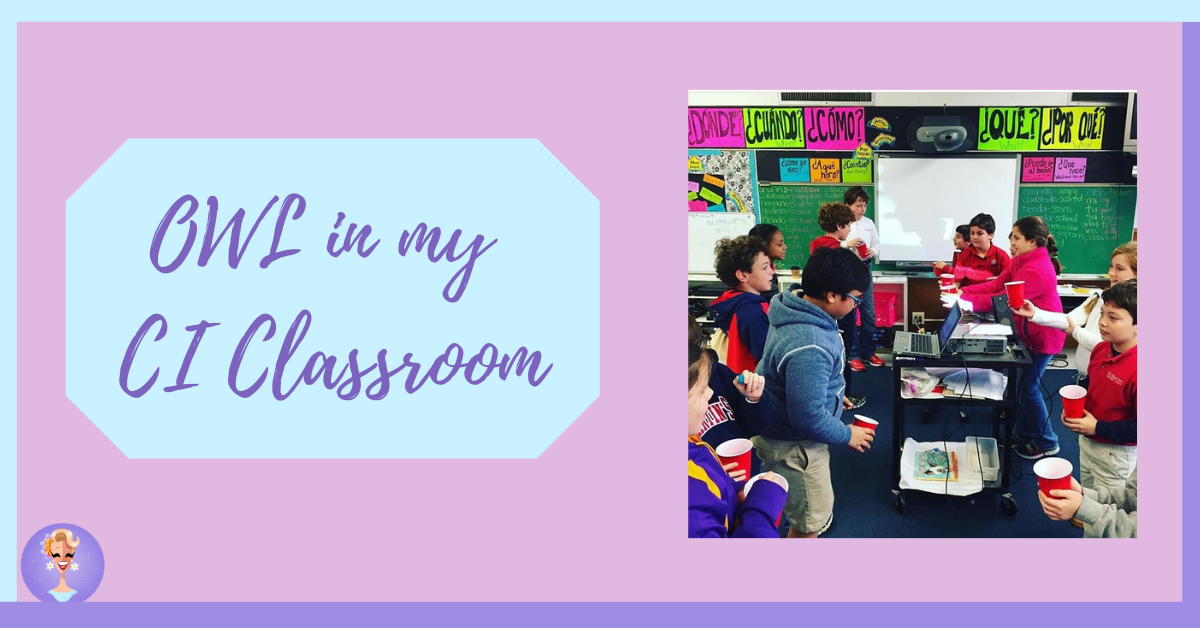 OWL stands for Organic World Languages. Last spring, Darcy Rogers, who is the founder of OWL came to my school to do a workshop with our WL teachers. Up until that point, I had felt very alone in my department as far as how language should be acquired and taught. She was an outside voice with a VERY positive, enthusiastic approach to teaching. Darcy opened everyone’s minds to the idea of acquiring a language rather than STUDYING it. We found that there were much more similarities between us than differences!

She taught a lesson to all of us in Mandarin which was really fun! After teaching abroad in China, I can get by conversationally for quite some time with what I acquired, so it was interesting to see others with no background in the language muscle through her upbeat, fast paced teaching.

WOW! I am learning this!

OH MY GOD! She was speaking so slow, but it felt like 100mph! I am going WAY too fast in my own classroom!

Acquiring a language this way is INCREDIBLY rigorous, but I am ACQUIRING!

These are almost always the same takeaways that people have after observing a lesson taught with CI or TPRS for their first time. I was impressed and intrigued. The HUGE difference between the two methods that I noticed immediately, was that OWL completely eliminated the use of L1. There was literally NO English in our DEMO. The couple of times people tried to use English to clarify or to establish meaning they were quickly dismissed (but in a POSITIVE way, which I loved).

Why OWL Is Unique

The OWL methodology places a large emphasis on the importance of students learning to struggle or fight to negotiate meaning rather than have that meaning established with a quick translation written up on the board. An OWL classroom is truly Organic. Rather than “target” structures, the students steer instruction and with the teacher as the guide. THEY are aware of the need for the language to be sheltered.

The other BIG difference between a CI classroom and an OWL classroom is the presence of OUTPUT. It is expected and encouraged right away. My CI teacher brain had red flags going up all over the place, but then Darcy asked us to go home and reflect on a few quotes, which can also be found on their website. These are the two that really got my brain going….

Output fulfills certain functions for language acquisition that are not available through input alone.

Communicative effectiveness does not necessarily include proportionately higher accuracy or grammatical sophistication.

My Experience In China

Darcy also challenged me to think about my time in China and how I acquired and learned to USE my Chinese so quickly. YES! I was in an immersive environment BUT, my colleagues at Disney English will tell you that EVERY day, I trained the Chinese speakers around me to teach me using ONLY high frequency structures, and speaking VERY slowly. I would IMMEDIATELY output with them, using those high frequency structures, absolutely BUTCHERING the Chinese as I went. They were DESPERATE to correct me, because I had absolutely NO sense of how to use the TONES. But, I refused to let them and explained that I wanted to learn Chinese as close as possible to how I TEACH Spanish.

I output and practiced my Chinese often with ANYONE who would have a basic conversation with me. It was BAAAAAD. I kept pushing, and by the time I left China, after 9 months, I was having hour long conversations with taxi drivers who were complementing my navigation of the language and my confidence. The noodle guy down the street who used to laugh and shake his head and IGNORE my pleas to speak and practice my Chinese, gave me hugs and told me he had never seen a foreigner learn so quickly.

The practice of “output” was important for me. Did I need it to survive in China? Heck no! I had friends who had been living there for YEARS (some actually there to STUDY the language) and I kicked their BUTTS in Mandarin! Did it enhance everything I did there? YES! It absolutely did.

So, before anyone jumps in to say that it ISN’T the same for our students, I will admit the following. YES, I was a motivated adult IN a country where I could be surrounded by the TL as much or as little as I desired. Even though I lived in a city with not NEARLY as many foreigners as Shanghai, it was SO easy to spend every minute outside of work with English speakers. YES, I am an adult who not only teaches a language but LOVES it, and teaches with a KICK BUTT method that leads to proficient, confident, language speakers.

HOWEVER, I create an environment in my classroom and my SCHOOL where students are eager, enthusiastic, and JAZZED about acquiring Spanish. We communicate in Spanish NOT ONLY IN MY CLASSROOM but OUTSIDE of the class too, because THEY WANT TO! So, this year, after the fantastic training that Darcy gave, here are the various ways you can see OWL in my CI classroom.

OWL In My Classroom

I have written my notes below. However, if you would like to see them in an “easier to read” format, please click on the link to this Google Sheets version that Derek Heckman created for me! He is the best!

What I observed in the OWL training

How it has been implemented in my classroom

The results I’ve noticed so far

I recognize that this is an OVERLOAD of information. However, I hope that if you take ANYTHING from it, it is that we need to be OPEN and constantly learning and experimenting OURSELVES for the benefit of our students.

YOU know your students. Nobody knows them as well as YOU do. Do what is best for your kids in your room. Pick and choose the best bits of various methods and techniques and tweak them to what your students need! Use lots of techniques and alter them to fit YOUR personality and teaching style. BE OPEN, BE ENTHUSIASTIC, and BE INQUISITIVE.

Until next time, HAPPY TEACHING!

Bring on the Blessings!

Hi! My name is Annabelle, and I am a teacher just like
you! I am passionate about helping teachers find JOY
in facilitating language acquisition for their students!